While it is true that koalas primarily eat gum leaves they have been known to munch on paperbarks like the Broad-leaved Paperbark and other non-eucalypts such as the Queensland Brush Box. They have also been observed eating bottle brush and wattle when flowering.

Interesting fact: Of the 600-700 gum tree varieties, only around 20 are preferred by koalas (including Blue gum, Gray gum, River Red Gum and Swamp gum) so they are finicky eaters. They like juicy leaves that are nitrogen rich and eat up to 500 grams a way on average. Little is known about the impact of drought on the nutritional value (or taste) of their food trees. 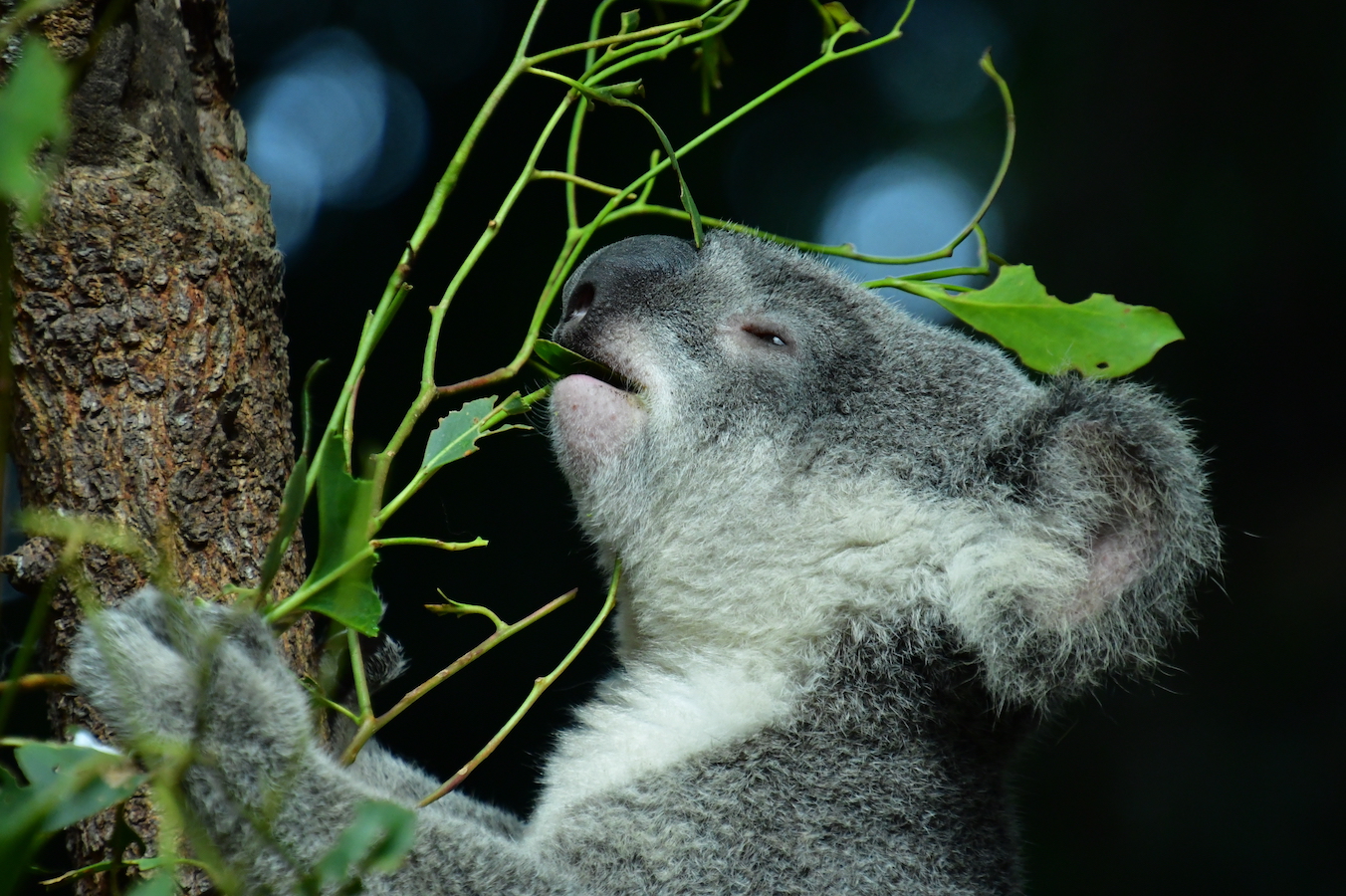 Historically koalas got much if not all the water they needed from gum leaves however the loss of higher quality habitat and lower water content in the ground (and thus leaves) has led to koalas needing to supplement this (hence koalas drinking from pools, dams, creeks, gutters etc).

IMPORTANT fact: PLEASE DO NOT GIVE KOALAS WATER FROM A BOTTLE. The safest way to provide a thirsty koala with drinking water is via a bowl, cup, helmet or hat from which they can lap. We’ve all seen videos of well-meaning people giving koalas water from a bottle however they risk forcing water into their lungs and developing aspiration pneumonia! 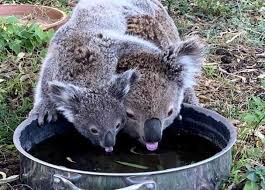 Eucalyptus leaves while toxic, low in nutrition and high in fibre content (plus tough) are not drug-like. Koalas do have to chew slowly and heavily to break the leaf down to a pulp like consistency to obtain any nutrient value and at the same time conserve their energy due to the leaves low energy return– giving an impression of their being lethargic or “stoned”.

Interesting fact: Koalas eat up to 3 hours a day, often at night, and have special bacteria in their gut that help them digest eucalyptus leaf which would be otherwise be toxic. Mother koalas pass this via their pap to their young as part of their development early in life. 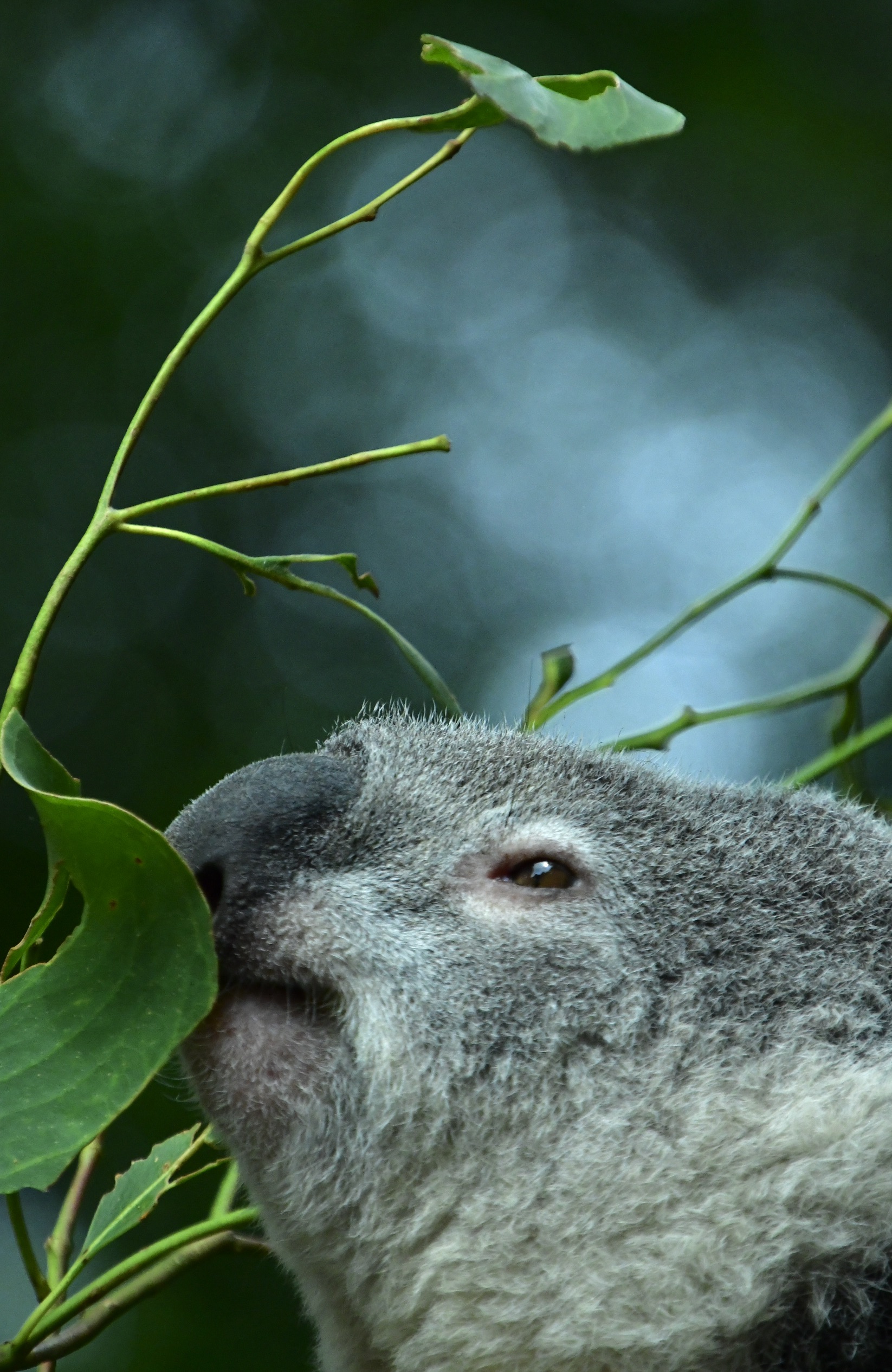 Koalas can actually move quite quickly on the ground albeit over short distances- when they come down to change trees, search for a mate or seek a new territory. They also will scoot up the nearest tree quite quickly if they feel threatened. They can be observed on occasion jumping from branch to branch and even tree to tree – and are especially active and agile if we try and bring them down from their tree for medical treatment!

IMPORTANT FACT: Koalas do not perceive fast moving cars as dangers hence they may not move quickly from or across the road and at night may freeze in the face of oncoming car headlights. On the other hand they will run from a dog moving toward them which triggers a dogs innate prey response. These two instincts often result in tragic outcomes for koalas. 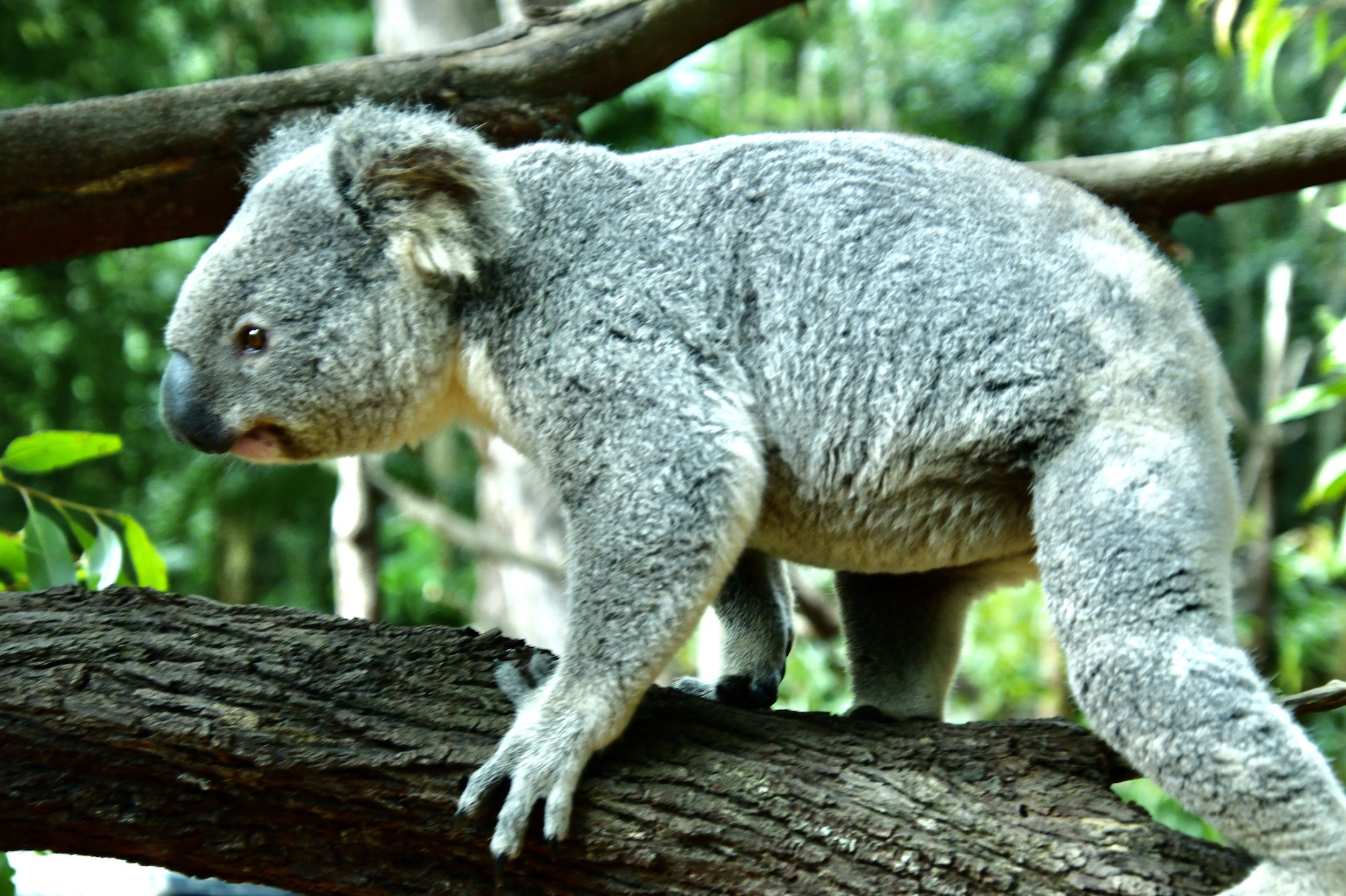 A male koala’s territory may be relatively small or measured in kilometres - and they will move throughout their home range. Koalas also form social groups which may include a dominant male, one or more females, joeys and sub adults.. Every year these young male koalas “disperse” in search of their own territory. Adult koalas are also quite mobile during breeding season (putting them at significant risk from drivers and dogs).

Important fact: A koala which remains on the ground or even in the same tree for more than a few days should be reported (1-300-Animal is a good first call). The koala may be suffering from injury or disease and the sooner it is brought into care the better outcome. 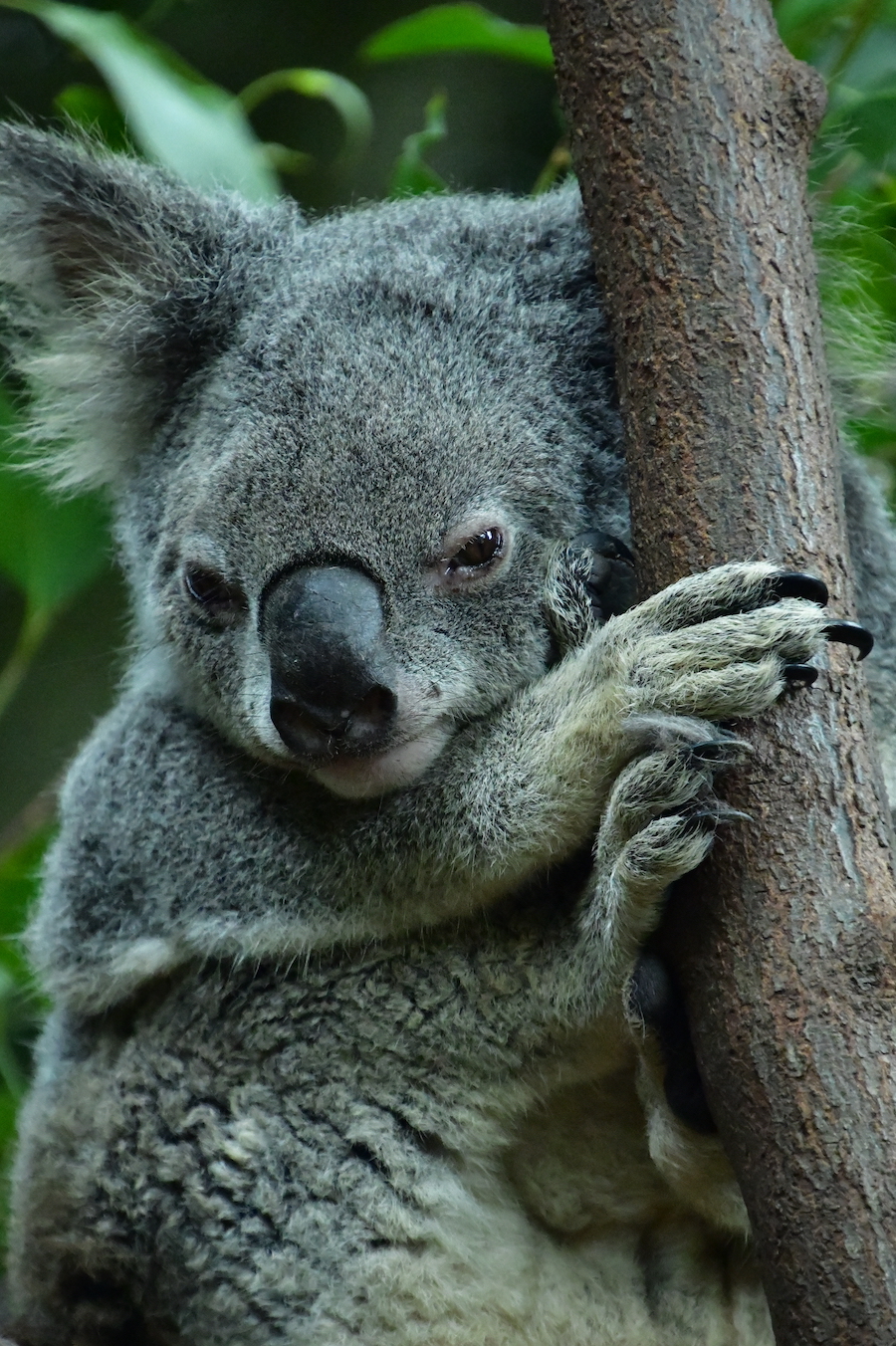 While its not an every-day sight koalas have been seen swimming across bodies of water to get to the trees on the other side – however they do struggle with the slippery sides of your backyard swimming pool.

Important fact:  Ropes, flotation devices and even a weighted branch across a pole positioned in your pool will provide a koala the assistance needed to get out of trouble. 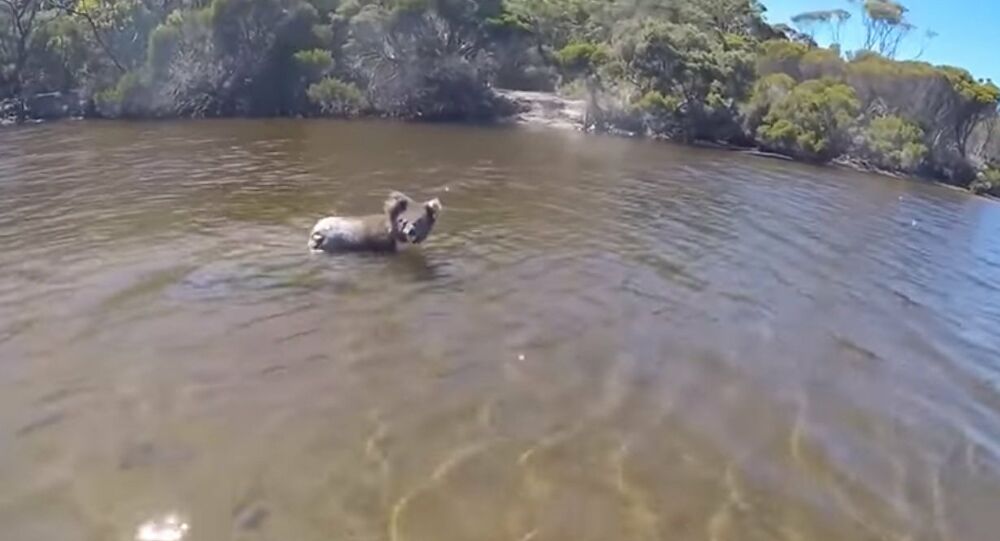 Koalas will not use a tree a dog has urinated on

Unfortunately, koalas do not recognize that dogs are dangerous per se so the smell of their urine will not cause them to avoid a tree or area. In fact, koalas will attempt to cross yards of homes with dogs in order to get to a tree or section of habitat they are interested in

Important fact: Even small dogs and/or a single dog bite pose a substantial risk to a koala. Their internal organs are easily pierced by a dog’s canines (even when there is no visible injury). If you even suspect a koala has suffered a dog bite please call 1-300-Animal ASAP. 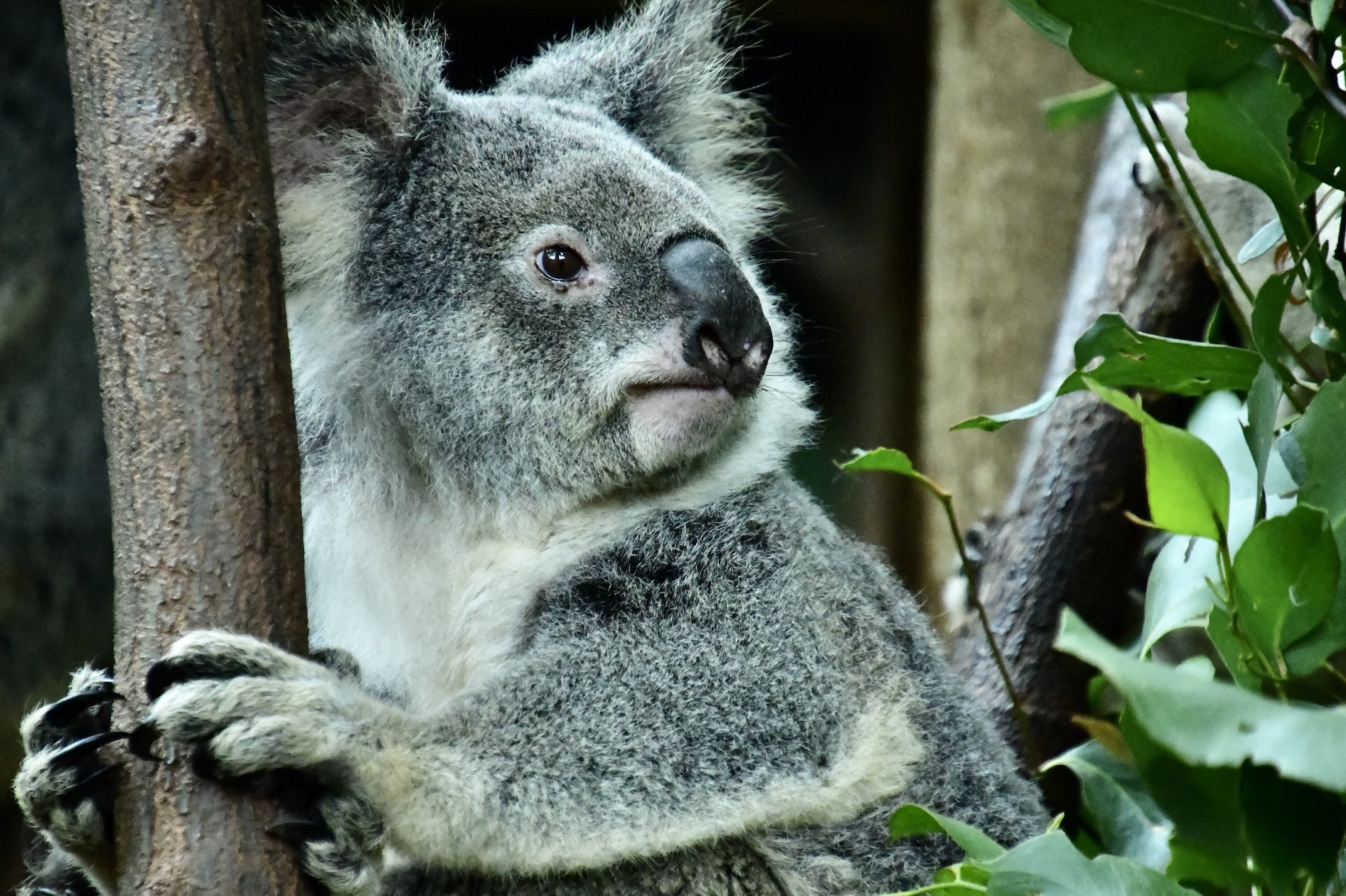 While a koala bred in a zoo may be safe to have placed in your arms (smile!) a wild koala is after all a wild animal. They also have strong legs, long claws and sharp teeth, can and will scratch and bite when scared.

Important fact: If you encounter an injured or sick koala the safest option is to call for an experienced wildlife rescuer (1-300-Animal). If the koala has come to ground and you happen to have a thick blanket you can put this over the koala until help arrives (but remember the strong, long and sharp bits mentioned above!). 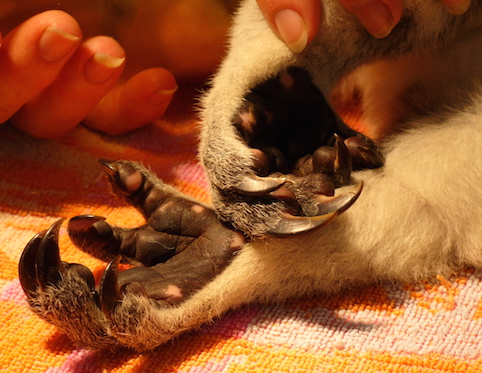 Koalas are a protected animal

Currently koalas are only listed as “vulnerable” in Qld, NSW and ACT. They are considered “common” in Victoria and South Australia despite their dramatic decline in numbers and lack effective protection. Worse yet, the habitat upon which they depend is continuing to cleared at a rapid rate - even after the drastic loss of forests in the recent fire seasons.

Interesting fact: Australia has one of the highest rates of mammalian extinction and deforestation amongst developed countries incredible as that may seem.           Queensland Koala Crusaders is lobbying to have koalas designated as endangered so that they can be fully and properly protected from the actions that threaten their continued existence 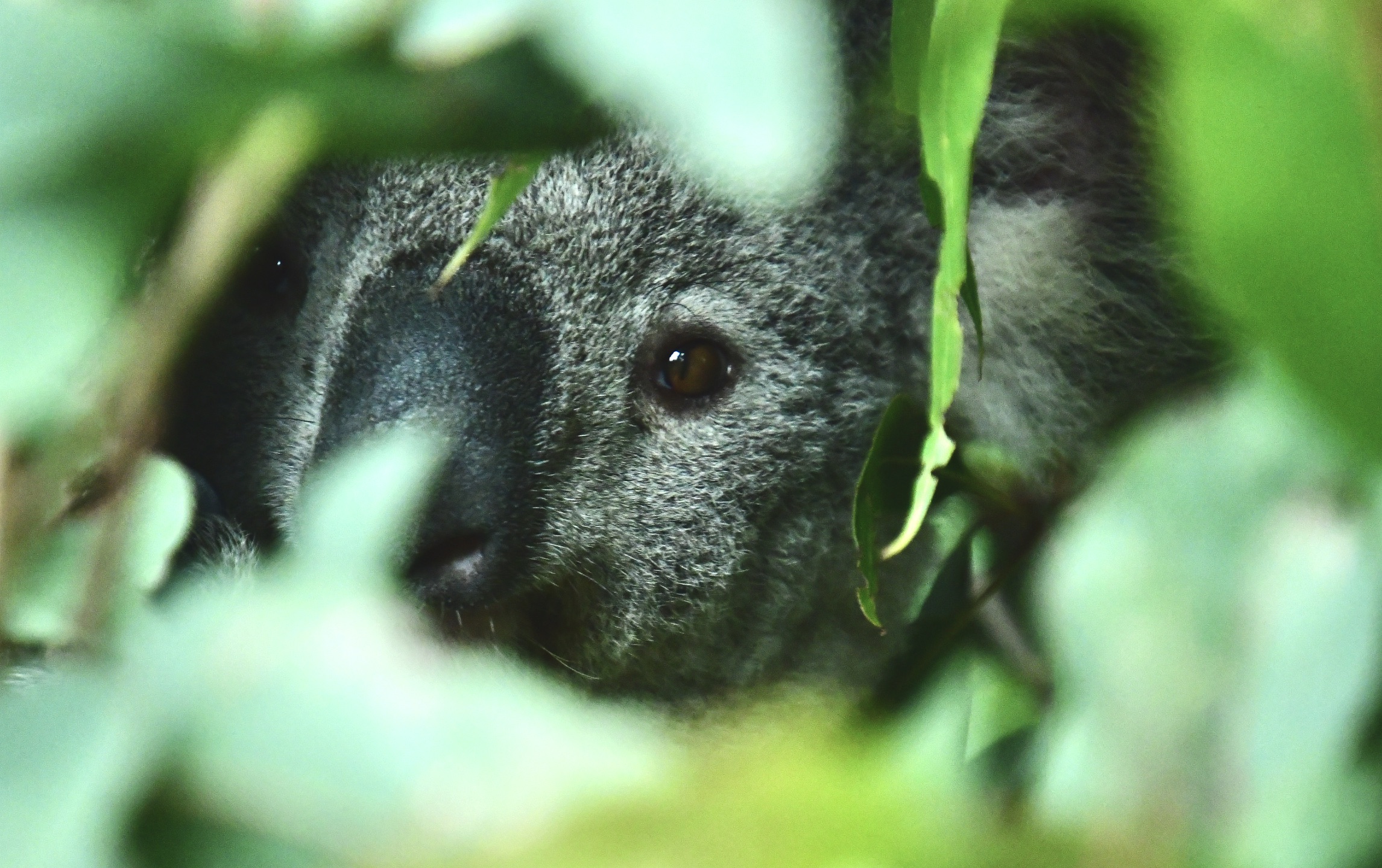