2015 began slowly for us at QKC.  Personal events of 2014 led me to introspection and re-evaluation of what really matters in this life.  Where we sit with Koala Conservation has concerned me. I have questioned why the good efforts of so many people have not halted the ever-increasing decline of an iconic species.  All across this gorgeous country, there are a growing number of groups that are willing to work together and put differences aside to support a “different” way, by truly speaking up for the koalas and their trees. I am grateful for this because TOGETHER we can make a difference!

January brought support to the “SAVE STEVE IRWIN WAY” campaign.  An important, ecologically rich strip of land is at risk for further expansion of the Bruce Highway and clearly needs to be re-evaluated.

We attended and filmed a “koala funeral” in the Redlands as yet another 40 koala food trees were brought down, fragmenting a prime koala dispersal corridor.  Local residents were devastated by the death of a frequently spotted koala within this habitat directly after its destruction!

The state election in Queensland gave us a change of government.  This provides an opportunity for us to engage with them to discuss the current situation and their recent announcement of the koalas' Vulnerable listing now applying right across the state.  While this is a good move in theory, it is time that we receive a TRUE commitment to koala conservation locally, as we think nationally.  We can no longer continue as we have, for koalas and their trees are running out of time.

February and March brought education opportunities in Noosa and a stall at the tenth annual Earth Frequency Festival at Ivory's Rock.  On the  1st we attended a high school excursion, walking a length of Eenie Creek Road, Noosa Heads, with year 12 students from Nambour Christian College discussing koala risk mitigation with the kids.  Next we visited Noosa District High School to discuss their thoughts regarding the current koala management policies and their ideas regarding a community “Have Your Say” opportunity.

Next up we attended a two-day meeting in Brisbane, hosted by the Australian Koala Foundation, regarding their proposed Koala Protection Act.  Queensland Koala Crusaders unanimously voted to support such an Act, and encourage others to do so as well after these meetings. After all, we have nothing to lose and everything to gain for the koala if an Act like this is enshrined in Federal Government Legislation and managed.

Most recently we have engaged with the Federal Government, who have been seeking stakeholder input as their Department of Environment develops a National Recovery Plan for the koala in Queensland, NSW and the ACT.  We made a submission to Noosa Council regarding their first ever Koala Plan and accepted an invitation from Sunshine Coast Council to attend a briefing in relation to their draft Koala Plan that was recently presented for public feedback.  These are all positive steps.

The end of May brought the "Bribie Gone Wild" Zoo Run which brought groups from around Queensland bringing wildlife awareness to the public.  It was a great opportunity to engage with other wildlife advocates and listen to speakers from around the region!

On this past June long weekend we participated in the World Environment Day celebration on the Sunshine Coast – a terrific occasion to "talk koalas".  In the days and weeks ahead we are focussing on updating our website and seeking greater participation in the community to spread the word and support our efforts, so we hope that you will join us as we continue to be the “Voice for the Koala”. Get involved!  Renew your membership or join us if you haven’t already!  It’s going to be an exciting six months ahead, so stay tuned!

Finally, we have many exciting events and activities planned - including An Evening with Sam Shepherd and Dear Willow at the Noosa Arts Theatre this Saturday evening, 13 June!   This will be a great night for those interested in the performing arts, the Sunshine Coast's emerging talent, and koalas.  Also joining them on the bill will be dynamic duo 'Gambler' (Michelle Lamarca and Simon Russell-Baker).  You can purchase tickets here.  We hope to see you there.

When watching koalas in the wild, PLEASE keep in mind these five (5) important principles to avoid stress and related illnesses to them:

1. NEVER touch the tree a koala is sitting in.

2. Maintain a distance of 10 metres (horizontal) from any wild koala.

3. Do not surround a koala’s tree. Ideally, all people should remain together in a group to avoid causing the koala stress.

4. Avoid excessive movement or noise around wild koalas. They are sensitive to disturbance.

5. Do NOT try to get the animal’s attention by making noises. 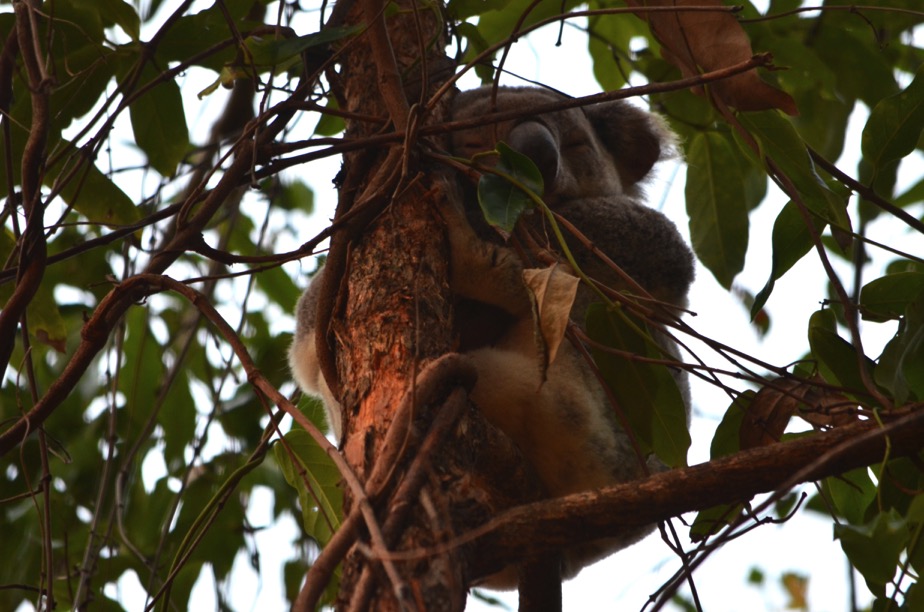 Above:  Koala 'Cuddles' is regularly observed at Noosa National Park.

Never let it be said that our Australian Koala is not fascinating nor unique, and because of their distinctive appearance is recognised worldwide as a symbol of Australia.

The Koala is a major drawcard for our Australian tourism industry and features in games, cartoons, books, soft toys and advertisements.  Over half the visitors to Australia per year, place the Koala at the top of their list of animals to see.

The most intriguing feature of our Koala is its childlike body and its teddy bear face.  First documented by Europeans in 1798, this little mammal was known to local indigenous Australians as the colo, colah, koolah, cullewine, Koolewong, boorabee, burroor, bangaroo, pucawan, bahorah and burrenbong depending on the local dialect, and most of these names mean ‘no drink’ because it receives 90% of its hydration from eucalyptus leaves, and only drinks when there is not enough moisture in the leaves.

In days gone by, the Koalas were hunted by indigenous Australians; however like the kangaroo and dingo, they play a key role within their myths, storytelling, and dream time as well as their cave art.  The Tharawal people believed that the koala helped row the boat that brought them to the Australian continent, whilst another myth depicts of how a tribe killed a Koala and used its long intestines to build a bridge for people from other parts of the world.  Aboriginal tribes in Queensland and Victoria regarded the Koala as a wise animal and sought its advice.  Bidjara speaking people credited the Koala for turning barren lands into lush forests.

Alongside the Ringtail Possum and the Greater Glider, the Koala is the only mammal that can survive on a diet of eucalyptus leaves.  One Koala alone can eat approximately 200-500 grams of leaves per day, and whilst eucalyptus leaves are poisonous to most animals, nature has blessed our Koalas with a digestive system that can cope with such a diet.  Because the Koala has such a slow metabolic rate that allows them to retain food for long periods of time, it means that they can preserve energy and they sleep for up to 18 hours a day, and become most active after sunset.

Koalas are highly territorial and just like humans, like to live within societies and mix with other koalas.  The Koala is well suited to life within the trees, with their paws that are adapted for gripping and climbing, they can tell whether or not a tree ‘belongs’ to another Koala or not.  Their fur on their bottom is densely packed in order to provide a ‘cushion’ for sitting between the forks of hard branches, and their thick woolly fur protects them from high and low temperatures and repels moisture when it rains, whilst their belly hair can reflect solar radiation.  It has a highly developed sense of smell and can ascertain whether the leaves of a tree are poisonous or not.  Koalas usually survive falls from trees and climb right back up, although some deaths do occur; this is usually from inexperienced young and fighting males.  When they climb down a tree, they go down bottom first and this is when they are at the most vulnerable to predators, such as dingoes, foxes, dogs, large pythons and birds of prey that threaten their young.

Koalas can live up to 18 years of age in the wild, or die prematurely from starvation as their teeth being to wear down and their chewing efficiency decreases, although the males usually die sooner due to their more hazardous life.

Another interesting characteristic of our beloved Koala is that the female gives birth to immature young whom then develops in a pouch, this pouch opens backwards towards the rear and acts a safety vessel for the young while the mother climbs, baffling most researchers.  Not all females breed, some produce offspring once every two or three years, depending on the age of the female as well as the habitat.  The little joey remains in the pouch until he/she is about six or seven months old.  Whilst he/she continues to use the pouch for another two months or more this is the final weaning stage, a process that no other animal possess.  The Joey feeds on a soft green fluid called ‘pap’ that researchers believe to be derived from the contents of the mum’s intestine, and produced with the normal droppings from the mother.  This prepares the intestine of the joey with bacteria, critical for its function as well as providing a plentiful supply of bacterial protein essential for accelerated growth.

The Koala, due to having a small brain, is incapable of performing complex, unfamiliar behaviours.  If presented with plucked leaves on a flat service, it will not eat the leaves as they cannot adapt itself to change from their normal feeding pattern.  So our Koala is really in a class of its own, it’s perfectly designed, lovable and unique. Its complexity and beauty strengthens our resolve to fight tooth and nail in the fiercest way possible to preserve their very existence, within the own habitat and away from peril.

Queensland Koala Crusaders Inc (QKC) is a volunteer non-profit organisation registered as a charity in Queensland.  It is approved to conduct fund-raising activities.  It also has the opportunity to apply for tax deductible gift recipient (DGR) status.  To qualify as a DGR, an organisation must be on the Federal Government’s Register of Environmental Organisations and endorsed by the ATO.

The DGR application process is quite complex and, in our case, required that a new constitution be written to deal with the legislative requirements.  With the input from members, that has now been completed and, once approved by the Management Committee, the new constitution will be tendered with our application to be included on the Federal Government Register.

This will take time but the benefits for QKC are enormous.  QKC can then seek donations that are large enough to meet its main objectives of establishing a Sanctuary for non-releasable koalas and forming a Land Trust to purchase land that can be preserved for wild koalas in perpetuity.